Jaipur is one of the most royal and historic cities of Rajasthan, where tourists are engaged for the whole 365 days of the year. From forts to palaces, there are many such creations in the city that take you back to the glorious past of Rajasthan. Among all these past traces exist is the first and ancient museum of Rajasthan whose structure is not less than a palace, Albert Hall Museum.

The Albert Hall Museum in the city of forts and palaces also gives you a glimpse of the traces of the past. This historical museum, also known as the Central Museum, is the oldest museum in Rajasthan. This historical work was created by Maharaja Ram Singh to welcome the Prince of Wales, King Albert Edward to India, after which it was renamed, King Edward.

The museum was constructed in front of the new entrance of the CT wall on the outer side of the Ram Niwas garden. Let us go on a tour of this beautiful and historical museum today with some beautiful pictures of it. 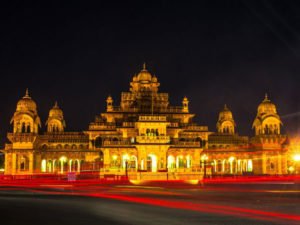 The architecture of Albert Hall Museum Maharaja Ram Singh wanted to make it a town hall but his heir Madhosingh 2 decided that it should be made an art museum for Jaipur.

The museum has a rare collection of old-time items such as miniature paintings, carpets, metal and wooden crafts, toys, toys, weapons and weapons, and a mummy of Egypt from the Ptolemaic period. The most extraordinary of these is a carpet depicting a view of a waterfall and a Persian garden. This carpet was bought by Mirza Raja Jai ​​Singh from Shah Abbas of Persia at an expensive price.

In the gallery on the ground floor of the museum, clothes and ornaments of people of different sections of Rajasthan society are displayed. There is an exhibition in which there is a collection of garments of special privileged class Rajputs and wealthy merchants and clothing of various tribes of Rajasthan like Bhils, Meenas, Gadolias and blacksmiths. While viewing this gallery, one can get acquainted with the culture and lifestyle of the tribes of Rajasthan.

A gallery of this museum is completely dedicated to the magnificent mehndi art of Rajasthan and this gallery is known as ‘Mehndi Mandana’. This gallery exhibits typical Rajasthani patterns and patterns that are considered unique and distinctive around the world. Another gallery has puppets and tearing paintings depicting the life of Pabuji Rathore, a Lok Nayak of Marwar. The central gallery also displays the forms of music and dance of Rajasthan which are most visible in this museum.