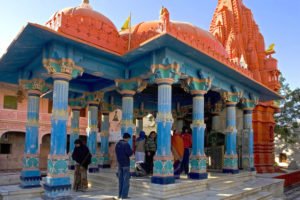 According to legends, Lord Brahma is slightly different from the other deities, he is immediately pleased with the devotion of his devotees and fulfils their wishes. According to mythological stories, many demons worshipped Brahma and took a boon from them and greatly harassed the deities and the sages, after which the demons were destroyed due to the untiring efforts of Lord Vishnu and Lord Bhole Nath. After which people stopped worshipping Lord Brahma and started worshipping Lord Shiva and Vishnu. There are many such stories which tell why Brahma Ji’s temple is so low compared to other gods and goddesses, let us know in this order were apart from Pushkar in India, where the temple of Brahma Ji is established.

This temple was later rebuilt. Although the original Brahma temple is said to be 2000 years old, the present structure dates back to the 14th century. The Brahma temple of Pushkar is one of the few Brahma temples present in India and in the world. Other temples dedicated to Brahma include Carambolim near Valpoi in Goa, Uttaramore Kovil near Srirangam in Tamil Nadu, Asotara near Balalora in Rajasthan, Khedabrama in Gujarat, Bithoor in Uttar Pradesh, Prambanan in Indonesia and Mother of Besakihin in Bali in Indonesia Temple. Sadhus and holy men take a ceremonial bath in the holy Pushkar Lake and then enter this temple.

The Brahma temple is also known as Jagatpita Brahma temple. This famous Hindu pilgrimage site is mainly made of stone slab and marble. The main idols of the temple are Brahma and his wife Gayatri. There is a swan (swan) at the entrance of the temple, devotees associate their visit to the temple with a visit to the sacred Pushkar Lake. Like the Gayatri temple, there are many other temples near the lake, dedicated to Brahma’s second wife; Savitri Temple, dedicated to the first wife of Brahma and Varaha Temple, dedicated to the boar avatar of Vishnu.