City palace, located on the eastern banks of Pichola lake in Udaipur (Rajasthan) is an example of a magnificent and massive palace that was constructed by rulers of the Mewar dynasty. Its construction began in 1953 by King Maharana Uday Singh II and was built over a period of 435 years. One of the most attractive features of the palace is that its architecture is a combination of Mughal, Chinese, European and Rajasthani architecture. The palace is surrounded by Aravalli mountains and was completely engraved with marble and granite. Marvellous marble and mirror work, massive garden, Silverworks, paintings add stars to its beauty.

The sprawling and beautiful city palace was constructed by Maharana Uday Singh II of the Sisodia dynasty- basically a Rajput dynasty of Rajasthan. The construction began in 1553 when the capital was shifted from Chittor to Udaipur. In order to protect their kingdom from the Mughal dynasty, he chose a site that was well protected by Aravalli mountains, forests and lakes. It was the beginning of the City Palace. After the death of King in 1572, his son Maharana Pratap took the throne. But Mughal emperor Akbar defeated him at the battle of Haldighati (1576). Mughal conquered Udaipur and included it into their territory. But after Akbar’s death, Udaipur returned to the Mewar dynasty.

Then after independence, the Mewar kingdom along with other princely states of Rajasthan joined hands with democratic India in 1949. They lost their special power and privileges. But the ownership of the palace fell into the hands of Maharanas. Many parts of the palace were converted into heritage hotels. Currently, Arwind Singh Mewar is the owner of City Palace. 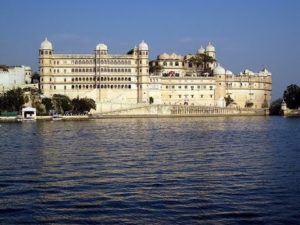 Location and Surroundings of City Palace

City Palace, standing in the middle of the Lake Pichola, is a mixture of Medieval, European and Chinese architecture. The complex is divided into small 11 palaces and several other structures. The palace is decorated with mirror, silver, inlay work and wall paintings. The upper part and terrace of the palace provide a spectacular view of the Pichola Lake and Udaipur City. The palace is connected by chowks and one can enter the city palace via massive and beautiful Tripolia Gate. The inner gates of the rooms and passages in the palace are narrow and small. It was made purposefully so that the enemy cannot enter smoothly inside the palace.

Things to do at City Palace:

Exploring the entire itself a great adventure. But for more fun, you can do few things. Such as

Within the palace, there are other complexes to explore like the Bhim Vilas, the Sheesh Mahal, the Moti Mahal, the Shambhu Niwas, the Amar mahal opposite to Badi Mahal. Badi Mahal is one of the alluring complexes of City Palace. It has a swimming pool and a hall with the finest miniature paintings. Where else, Bhim Vilas complex is also famous for miniature paintings. Beautifully designed women quarter known as Zenana Mahal is another attraction of the Palace.

If you are visiting City Palace then you should not miss the Mewar light and sound show. It is “The Legacy of Honour” that is organized between 7 PM to 8 PM. Rajasthani and folk cultural performances are the main highlights of this Light and Sound Show.

The City place Museum adorably depicts the culture and history of Mewar dynasty. A part of City Palace and Zenana Mahal was converted into a Museum. This particular museum displays a large collection of old weapons, glass and mirror mosaics, Mewar paintings, traditional Rajasthani costumes etc.

Places to Visit Near City Palaces

Gulab Bagh and Zoo: Largest garden in Udaipur. It is at a walkable distance from City Palace. Lake Pichola and Popular garden-like “Saheliyon ki Bari” and restaurants like Sunset terrace, Amrit Sagar, the whistling Teal, Lake View Rooftop Restaurants are a must to visit places.

The best time to visit the City Palace is in the morning to avoid the crowd and scorching heat of the sun. Student can carry their ID cards to avail a special discount.

Entrance for child below 5-year-old child is free.