Deserts in India offers the most spectacular landscapes. You can explore the fascinating Thar Desert to the incredible cold desert of Ladakh that packs an assortment of desert destinations for intrepid travellers.

The Thar Desert is also known as the Great Indian Desert which is the 17th largest desert on earth. A major part of the Thar Desert is in Rajasthan. As it extends into Gujarat the golden sand desert transforms into a dazzling white salt desert. Nestled high in the Himalayas, Spiti Valley in Himachal Pradesh and Ladakh is known as cold deserts. Both places don’t get much rain due to their position.

If you landed on this page looking for the best deserts in India to explore then you are at the right place. You must know the magnificence and glory of the Golden Thar Desert. Amidst the tales of the royals and their forever footprints on the sands of time that you shall discover the rich culture and get to the core of the traditional roots that hail.

The Thar boasts about its royalty with the flashes of vibrant colors during the day and as the dusk sets in the entire sand kingdom light up with the artist that perform fire dances and the air spreads folk tunes being played by the locals. For individuals away from the vicinity of the desert life camels are just transporting animals. However, for the locals, the animal is regarded as the ‘ship of the desert.’ 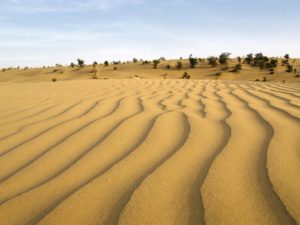 Thar attracts tons of tourists within and across the border every year. The reason for its ever-increasing popularity is its wide range of offerings.

You have different options of stay which is right from choosing to stay as simple as a nomadic backpacker to lodging in a facility straight out of the Arabian Fairy Tale that you have choices. During the festivity, the locals sing the bravery, courage, and romance of the royals in the past.

The tricks and shows on display by the locals are performed with unbeatable zeal. Sam dunes play the role of eye candy for tourists as the dunes carry the glory and golden shades of art. The cuisine served here in all senses, right from color to odour, everything is gulped able! The lifestyle of the locales is something to be noted. Irrespective of the change in times majority of the houses remain painted with mud. The community believes that it is important to be connected to the roots along with the blending in modern times. The Great Indian Desert continues to catch attention due to its glorious and vibrant present.

Note that the Golden Jaisalmer is also known as ‘The Heart of The Thar’! It is a double treat for explorers to get the best of the goldenness of both Jaisalmer and the mighty desert. Due to its natural photogenic landscape, the locale is also widely popular in the cinematic industry and stays in the lens, even though the climatic conditions are pretty harsh, the locales continue to be cheerful and continue to carry on the golden desert.

When to Visit the Thar Desert?

You can explore the desert in the winter months as the summers are unbearable for the heat resistance. Though the winter nights are also cold then it is still easier to venture out in the cold than on the sand during scorching heat. The massive festival of the desert takes place in February every year, so it is a double treat for you.