The magnificent Gadisar lake is situated in the beautiful Thar desert which is almost 30 kilometres away from Pakistan border the golden city Jaisalmer Shelters many of the Historical monuments at present. Gaddi Sar Lekh most important man made features of the golden city Jaisalmer which was built in the arid region of Rajasthan the lake is situated on the outskirts of Jaisalmer the best thing one can witness near the lake is watching the sunrise.

This artificial lake was built around the 12th-13th century which is now the popular spot for the tourists as it is considered to be an ideal man made Lake which is the  best place to visit for those who are architecture lovers, culture enthusiasts.To rejuvenate yourself in the golden city Gadisar lake is considered to be the best place where you can enjoy the mesmerizing view of the sunset.Apart from this it  is the place which attracts the Peace seekers. To Experience the Gadisar lake you can begin with taking a tour  around man made Lake which would provide you a lot of fun full experience. Exploring the beauty of the lake, even watch some of the migratory birds flying around the lake, also visit the desert culture centre and museum which shelters a number of historical aspects of Jaisalmer.

The beautiful man made Lake is situated very close to the Jaisalmer Fort, Temples and Tilon-ki-Pol.One can start the tourby taking a look on the Beautiful Gate of Tilon-Ki-Pol.The lake is a best example of the fine architecture which is carved with the yellow sandstone.You can take a boat to explore the beauty of the place.Gadisar lake is whole infused with catfish so the tourists never forget to feed them or prefer to drop a piece of biscuit to them.There are several towers built in the lake. You can climb on any one of them and have a look of the beautiful man made lake.

Gadisar lake has various gateways among them one of the prominent gateway was built by a courtesan named ‘Tilon’ basically it is called as ‘Tilon-ki-Pol’ which actually means Gate of Tilon. It is dedicated to the lord Satyanarayan as by placing the statue of lord Vishnu . At various times several attempts are made to remove the shrine but the shrine still survives. 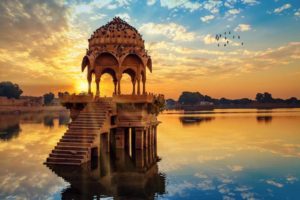 How to reach the Lake

As the railway station is just 2 km away from the lake. Although there are many ways to reach the beautiful man made lake but the best and quickest way to get the lake is you can hail a taxi or auto. As by auto it takes approximately 10 minutes to reach the lake.

Best time to reach the lake

It is advisable to visit the lake is during winters so that you can avoid the scorching heat of the desert. Generally the weather of Jaisalmer is mostly hot and dry.The winters are very cool and breezy whereas the summers are very hot. Apart from thus the weather from July to September easily exceeds 40 degree Celsius.

Places to visit near the Gadisar lake

Jaisalmer Fort address Another Jewel which was built in the reign of Rawal Jaisal the Ford is  rich in history and its beauty. This is the one of the largest Forts in the world and has Museum, shops restaurants, residential, accommodations etc. Fort was built in 1156 and also the Majestic Fort has four gateways for entering i.e Ganesh Pol, Akshay Pol, Suraj Pol and Hawa Pol. TheFort is a blend of Islamic and Rajputana architecture.

Triloki Pol which is the beautiful Gateway with you would notice very first while visiting the Gadisar lake is built by the famous yellow sandstone of Jaisalmer Pole is enriched with the artistic heritage. Apart from this in 1908 an Idol of Lord Vishnu was installed just to save the temple from demolition.

The museum depicts the history of Rajasthan princely states and also has 8 effects which shows the traditional Rajasthani culture. It has musical instruments, ancient coins and currency, Traditional jewellery of women folk, hunting gear and also the historical displays of rulers.

Lord Shiva on the bank of the lake

The temple is located on the banks of gadisar lake Lord Shiva temple is one of the highly visited temples for Hindus across the country. The Temple  has a prestigious position amongst the Hindus. Also  the structure of the temple is built in a very unique style. As to enjoy the beauty of the temple you should come here during the Aarti.

Location: The lake is located in the postal Colony which is two-wheeler metre away from the railway station.

Timings: Witness the beautiful gadisar Lake anytime during the day but the boat facilities are only available from 8 a.m. till 8:00 p.m.

Entry fee: the entry to the man made Lake completely free but the boating charges are around INR 10 to INR 100.It includes Row boat, Paddle boat and Shikara.