In the beautiful ranges of Aravalli hills there is a monumental fort known as Jaigarh fort with an impressive height of 500 meter above sea level. The fort was constructed in the year 1726, by Maharaja Jai Singh II as a means to reinforce the amber fort. Jaipur also has a “Jaigad Fort”, one of the few military buildings of medieval India. There are many places like palaces, gardens, water stitches, other stores, shastras, cannon factories, temples. Something special remains in this fort too. The sprawling parkot and entrance of the Jaigarh Fort tell many stories of it.Built and designed by a talented architect named Vidyadhar, due to which this fort attracts visitors from here.

Jaigarh Fort is said to be the strongest of the three forts and this fort never faced any major resistance. The world’s largest cannon located here has been tested only once. This fort tells of the rich past of the city and is named after the ruler Sawai Jai Singh II, who built it. Jaigarh Fort is a magnificent architecture built in the 18th century. Jaigad, along with the Amer Fort, was located in the city of Amber, which was ruled by the Kachhwahaas from the early 10th century. The fort became the main cannon foundry during the Mughal rule and was also used to keep other metal with ammunition required for war. The cannon post at Jaigad Fort remained safe until the defender Dara Shikoh was defeated and killed by his own brother Aurangzeb. 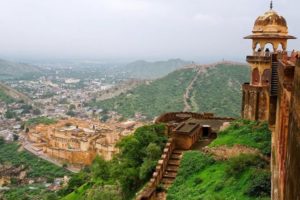 Jaigarh Fort is an attractive structure spread over a vast range. This fort is protected by thick walls of sandstone with some special architecture like Lalit Temple, Vilas Temple, Laxmi Vilas and Aram Temple. Apart from this, Ram Harihar built in the 10th century and Kaal Bhairav ​​temple built in the 12th century also add to the charm of this temple. The biggest attraction of this fort is the world’s largest cannon on wheels known as ‘Jaiwana Top’ and the huge palace complex. Apart from this, a garden along with a museum is also located in this fort. The red sandstone walls of Jaigad Fort are spread over a length of 3 kilometers, which is about one kilometer in width. There is a square uplift within the boundary of this fort and embankments have been constructed to reach the upper levels of this fort building.

The court room and hall are decorated with magnificent windows and a central watch tower overlooking the entire surrounding landscape. Entrance to the Aram Temple here is through the Avani Darwaza which is a very magnificent triple vaulted entrance. The charming view of Sagar Lake located near the Aram Temple fascinates everyone.

Complete information from Timing to Fee:

Rajasthan is a desert state of India and the temperature is very high during the summer season. The summer season here falls from April to June. The best time to visit Jaigarh Fort would be during the spring or winter months i.e. September to March as it is an ideal place to enjoy a holiday in Jaipur city and visit various places here.

Jaigarh Fort is located about 15 kilometers from the city center of Jaipur. Where you can easily reach the city with the help of autos and taxis. The city of Jaipur is well connected to many major cities of India by railways, airways and roadways. Jaigarh Fort is one of the strongest forts in Jaipur and provides a spacious view of the entire city.