Jaisalmer Fort is situated in Jaisalmer it is also known as the ‘Golden city’s ‘Golden Fort’ or (Sonar quila) which was built by Rawal Jaisal who was a Bhati Rajput and was the founder of Jaisalmer city According to the story behind it an earlier  construction of lodhruva  was done with which Jaisal was dissatisfied so a new capital was established .It is believed that it is one of the very  living forts across the world it is also said that one fourth of the cities population still lives within the Fort. The Sonar quila is considered the second oldest Fort in Rajasthan which was built in 1156 AD. The qila has been a part of many legendary battles even also today the fort holds the same charm and gives positive vibes. The ford is considered to be the popular Landmark of Jaisalmer.

Initially the fort was named as ‘Trikut Garhi As it was in a triangular shape and was also buìlt over the famous Trikuta hills. The Sonar Quila consists of 99 bastions, from these 92 of them were built between the year 1633 and 1647 fort is considered to be 250 foot tall which is also protected by 30 feet long walls. The Fort is also 1500 feet long and 750 feet wide also built on a hill which raises above height to 50 feet that is 76m above the surrounding .The base of the Fort is 15 feet tall forms the forts outermost surroundings. The upper towers of the fort forms a defensive inner wall perimeter that is about 4 km long .As the Fort is surrounded by the four massive gateways Ganesh Pol, Akshay Pol, Suraj Poland Hawa Pol which have their own importance as The Suraj Pol has been given the name because the first Sun rays which falls on the city hits the gate just like this all the other entrance gates have their own significant stories behind them and carved very beautifully which in itself shows the combination of power and beauty .

Rajmahal palace which was the residence of the Maharawal of Jaisalmer. Inside the Fort there are seven jain temples which are beautifully built by the yell

ow sandstone during the 12th-16th century .The Moti Mahal Palace is also known as the Salam Singh Ki Haveli which is extremely beautiful and magnificently carved with amazing architecture built in 1815 with a peacock shaped roof made various balconies the texture,pattern,designs areat the priority even now they showcase the same royalty and energy of the Rajput’s .The drainage system of the Jaisalmer fort is designed very brilliantly and is callet the ghut nali which allows for the easy drainage of the rainwater in all the four directions. The fort looks majestically beautiful in the morning when the first rays of the Sun reaches to the ground.Also the view of the sunset from the Fort is gives the magnificent look to  all the travellers and also the photographers.Apart from from the palaces The golden city Jaisalmer is also well known for artistic brilliance.The handbags of the city are also very popular which are made from the hides of wild camels.

There are numerous eatries including Italian,French etc.The famous Indian film director Satyajit Ray wrote a detective novel Sonar Qila which is based on the fort and later he did the shooting of the movie here.As the film became a classic and a large number of tourists visit here . The fort has been included in the UNESCO world heritage site list during the 37th meeting of the world heritage committee.

How to Reach the Magnificent Fort

By Air : The city does not have any airport. The nearest airport to the city is Jodhpur airport which is well connected with domestic and international flights from major places and is around 275 km away from Jaisalmer.

By Train : Jaisalmer has good connectivity from the Railways two major cities like Delhi Jaipur Mumbai Surat etc. One can easily travel via train to Jaisalmer.

By Road : The city is well connected to the major via road so one can easily choose public transport just like buses or personal cars etc.

Best time to visit the Fort:

As the fort is situated in the between the beautiful Thar Desert so the best time to visit the city is between the months from October to March as the weather is very pleasant.  While during the time of summers the city witnessed a very hot climate which us unbearable. 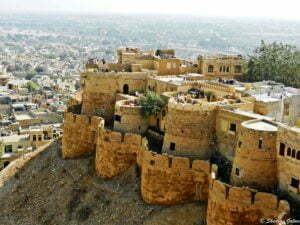 The magnificent fort is located at the Manak chowk Fort road.

Timings of the Fort are from 6AM to 5PM daily. The total duration took to visit the fort is 2 to 3 hours

Entry fee: 50 per person for Indians

250 per person for foreigners.

Places to visit near Jaisalmer Fort

There various places situated near the Majestic Fort which one can visit at a time and can also enjoy and  witness the beauty of the architecture and can know about their significance and importance.

It is  situated 21 kilometre away from the golden city and is an abandoned village which was established in the 13 century as a prosperous place which was filled with happy families but during early 19 century it was ruined for some of the unknown reasons.

Bada Bagh is situated on the small hill basically it is a garden complex which is about 6km north of Jaisalmer. The garden has seen all tabs for derulo queen’s princess and other royal family members. There is also a tank known as Jaitsar tank or Jait bandh.

It is a piece of architectural brilliance it is the most famous among all the havelis of Jaisalmer. It is a cluster of 5 small havelis. It has been said that Patwa was a rich man and a famous trader.