These temples are located in Jaisalmer Jain temples are situated inside the famous Jaisalmer Fort. These sites are overloaded with  heavy historical and religious importance along with them; they are strongly associated with the religious sentiments. The temples are the best example of architecture. These are the most interesting and introducing attraction sites that you should absolutely include into your list. Temples are rich in architecture and carved structures. Each of the 7 temples are dedicated to a different tirthankara of the Jains. These temples are treasure to the lovers of history and architecture all the seven temples are linked with each other all these temples have a unique quality of being alive. Apart from the architectural quality Jaisalmer was considered to be a wealthy state as many of the Mughal rulers invaded the city and Invaders also damaged most of the pilgrimage sites. According to the local folklore, it is  believed that initially there were two communities namely the kshatriyas who were the rulers and the Brahmins who were the teachers. But the Muslim kings invaded the temples and destroyed the rich jain temples . After the incidents of the looting and plundering in the temples the Brahmins demanded the rulers for money to build the Jain temples only two communities live within the fort that is the kshatriyas and Brahmins but the Jain temples receives a huge amount of donations from the Jains from all over the country.

Architecture of the Jain temples

These temples are constructed with various architectural methods and Designs They were built in a Buddhist style architecture and are one of the earliest examples of Jain architecture. These are consequently 7 temples inside the Fort with high raised walls. They were  built around the 15th and 16th centuries these temples are unique as they are tall enough,which can be easily spotted from a distance the temples are also constructed by using the yellow sandstones these temples are filled with  intricate features which attracts the tourist and have the most beautiful idols, intricate stone carvings. Also the temples are dedicated to the Tirthankara Rishabhnath and Parsvnath which hold the greatest importance among all the Other temples. 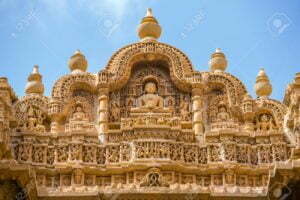 The entrance gate of Parshwanath temple is majestically beautiful and  has a plush carving specially on the pillars and columns.Even though  the inner walls of the temples are beautifully decorated with the ancient Jain style also the ceilings of the Majestic monument are covered with floral designs and also elaborate celestial cosmic symbol.

The best time to visit the temples are during the morning hours if you are known as a visitor because the temples do not allow non-Jain visitors to enter in the afternoon morning so showing the morning hours gives you a lot of time to explore the seven temples. During the summers Jaisalmer has a very hot climate so the best time to visit the fort is from November to February as the atmosphere in the temple during the winters are comfortable so you can plan a visit during the winters Instead of Summers.

Places to visit nearby the temples:

Sagar lake is a lake which is only a few miles away from the Jaisalmer fort ,the beautiful lake was constructed around the 17th century just next to the Amar Singh palace. As the palace was built by the Maharwal Rising the owner of Maharwal Amar Singh.The castel is a five storey building with its walls covered with beautiful paintings and the ceilings covered with elaborate murals.As the lake provides a best view of sunrise and sunset even though the environment is so pleasant there.

Vyas chatri is not so far away from the majestic Jaisalmer Fort .It is a memorial monument comprising various cenotaphs which are made of sandstone basically it is a burial point of the royal kings and their wives. As the spot is highly famous for the Sunset view and is also a perfect spot for the one who is fond of photography.

Location: These Temples are located on the Fort Kothari Para in the golden city Jaisalmer.