Rajasthan is well known for its architecture brilliance done in forts and palaces , As there are uncountable number of Forts in Rajasthan but the Khaba Fort of Jaisalmer is very among these forts,Khaba Fort is located in the Khaba village which lies in the centre of the giant Thar desert. The fort is a ruined citadel although it is an architectural landmark which is full of histories and mysteries in the epicenter of the Kuldhara village Many tourists who visit  the place come to know about the several mysteries which haunts the fort till now. The streets lined up with the crumbling houses  near the fort are a very popular spot for the tourists visiting there.

Architecture of the Khaba fort

The architecture of the fort once belonged to the Paliwal Brahmins of the Kuldhara village who fled from the town in the 1880s  living behind ghost town. The small Towers intricate works and beautiful Windows also add the Elegance to the architecture also the charm of the Fort is enhanced by a muster of peacocks also has a small Museum within itself which represent the ancient artefacts and various kinds of Rock fossils there are also the remnants of the Shiva temple and mud Huts there is a staircase which leads to the underground which is the home to 70 to 80 sandstone houses one can easily see the entire village and the ruin nearby areas from the top of the Fort and the best thing you can always see some peacocks angles around the Fort with their wide Wings open although the Fort is completely ruined or abandoned but still one can find the beautiful Windows and some of the architectural works and on the walls. 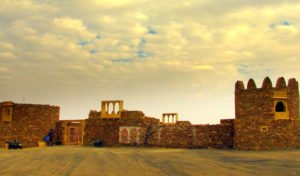 The village was the home for many Paliwal Brahmins from the late 13th century all about 80 to 90 families were living there in various huts and small houses which were scattered around the village. Basically the mysterious story of the Fort started in 1825 when in the single night all the villagers fled away and went to some other place till now no one knows the mystery behind it  where the villagers went and this remains unsolved till the date. Some of the possible reasons are an earthquake shook the village badly, also dwindling of the water supply, and a forceful marriage of the Kshatriya king with the Brahmin girl.

Historical Museum in the premises:

The Khaba Fort situated in the centre of the  beautiful Thar Desert also consists of a museum which has many sand formations. The Tourist can easily witness many of the geological artefacts which are native to the Thar Desert. Even some of the different fossils are also kept there which were found in the region other than this the visitor can also have a look at the varied rock formations .

How to reach the mysterious Fort:

By train : You can take trains from Jodhpur to Jaisalmer as there are daily trains which run Jaisalmer from Jodhpur and once after reaching at the station you can take private cabs that will take you to the Khaba Fort.

By Air : If one wishes to come by air so the closest airport from Jaisalmer is Jodhpur. From Jodhpur anyone can easily hire a taxi cab to reach Jaisalmer or can also take trains to Jaisalmer or private buses.

As the best suitable time to visit the Kaba food is during the winter season that is October to January as the climate during this time is is very pleasant also one can enjoy the desert safari in the sand dunes as it is advisable to not travel during the summer season because during the summers the heat of the Sun will exhaust you.

Places to visit near the Majestic Khaba fort

Tanot Mata temple :It is a historical temple which is located near the India – Pakistan border and is dedicated to the Hinglaj Mata as the temple is a very popular spot for the visitors. Jaisalmer war museum: Many of the tourists come and visit the Museum and learn the history of the several wars which were fought between India and Pakistan, The Museum was built in 1965 to honour the Martyrs soldiers who fought near the border.Historical  Museum is also popularly known as JWM. The Museum is all about 45 kilometres away from the harbour Fort and it is very easily connected by road.

Timings : The fort remains open from 8.am to 6 pm daily

Entry fee : The entry fee for a person is Rs 50 per person and Rs 50 for the cameras.