Nakki Lake is the first-ever man-made lake in India, is also the most preferred place to see in Mount Abu you can go for a boat ride at the lake and can also enjoy the horse riding around the lake, can also capture the panoramic view of sunset which becomes so adorable. The lake is about half mine in the length and 20 to 30 ft deep. There is a rock named Toad Rock on the hill which near to the lake.It is also considered to be a holy lake as Mahatma Gandhi’s ashes were immersed in Nakki lake on 12th February 1948 and Gandhi Ghat was constructed there.

The beautiful lake is all over surrounded by the Aravali ranges which are also known as Nakki jhil it is considered as a Paradise for those who are nature lovers. This beautiful man-made Lake is a gem in Mount Abu and is surrounded by greenery and very sharply shaped rocks. The visible clean water and beautiful surroundings gives a romantic feel. It is also well believed that the love story of a sage Rakshiya Balam is also associated with the lake, who liked the daughter of the king and dug the lake with the nails. 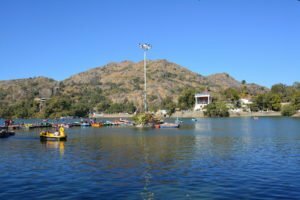 Without boating a visit to Nakki lake is incomplete. As you sail through the clear blue water of the lake you can enjoy the beautiful views of the majestic hills and the lush greenery. There are two types of boats available that are pedal boats and the Shikharas. Basically the boat ride lasts for 30 minutes in which you take a tour of the entire mesmerizing lake. The costs range from 50 to 100 rupees.

The mesmerizing Lake can be visited throughout the entire year. But if one has a problem during summers so the best time to explore it is during monsoon and the winters the temperature varies around 30 degree celsius in monsoon and goes to 12 degrees since winters. The beautiful greenery enhances beauty. Due to Aravalli ranges summers are considered to be hot in Mount Abu. One should explore the scenic lake during the months July to January. It is better to visit the lake in the morning.

How to reach the mesmerizing lake-:

The lake is located on Ganesh road, near the main market in Mount Abu. One can easily reach the lake through the cab, taxi or an autorickshaw also.

Places to visit near Nakki lake-:

Guru Shikhar – The highest point on the mountain range is the best place for sightseeing in the beautiful hill station, it takes about 300 steps to reach Guru Shikhar. There is a temple named Guru Dattatreya who was the incarnation of divine Trinity (Brahma Vishnu and Shiva) people there enjoy the place for its religious significance and for its natural beauty.

Toad Rock -: It is located on the main trekking trail it is a huge rock formation. Situated in the Aravali range and is also known for its pleasant atmosphere and also gives the panoramic views of the lake and hills.

Adhar Devi Temple – It is an important shrine dedicated to Goddess Durga. After climbing 365 giant stairs you reach the temple. The temple is the best example of peace and tranquillity the views from the top are highly adorable. The panoramic views change the entire environment as it is a very beautiful adventure.