Tanot Mata temple was established in 847 A.D. The Deity was installed in the same time period as well the construction of this miraculous Temple started after the Bhati Rajput king Tanu Rao who made Tanot as the capital of the kingdom.

According to the Charan literature,the temple is the incarnation of the goddess Hinglaj Mata.It is a blend of religion and miracles .The temple is situated in the village Tanot in Jaisalmer district. This site is a major attraction for the tourist who visit the Thar Desert Tanot mata  temple is located close to Longewala which is the battle site of the Indo Pak war of 1965 and 1971 the soldier present there near the temple have a lot of Mysterious stories to share with tourist visiting there the BSF has also constructed a museum near the miraculous Temple that tell the glory of the temple which is associated with the Indian Army. The Tanot Mata helps the Indian soldiers who were at the border. Despite 3000 bombs which were bombarded from the Pakistan border as not one of them exploded in the temple and unexploded bombs are still kept in the Tanot museum which is within the temple premises just after the war the temple was handed over to the Indian security force who till now continues to manage the temple .The Indian Army also built a Vijay Stambh within the temple and every in 16th December the victory of India over Pakistan is being celebrated there. 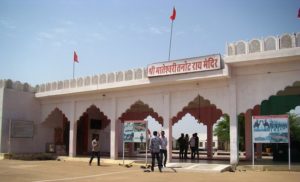 While visiting the temple you can also witness the beautiful landscape that are dotted there with yellow sand dunes camels goats camps and local people in various Rajasthani clothes when you read the temple visitors there are filled with positivity and divinity of the temple as there are many e instances in and around the temple which makes people revisit the temple.

How to reach Tanot Mata temple

The trip to the tanot Mata temple is quite memorable because of the Yellow sand dunes of the Majestic Thar Desert the best and safest way to reach the temple is via taxi  even though some people hire a bike to cover the distance. The road which connects Tanot Mata to the district of Jaisalmer is filled with the wind mills flocks of animals such as camels dear which truly turns your trip into an adventure.

Best time to visit the temple

November and  April is the best time to visit Tanot Mata temple as during these months.The weather there is very  pleasant and the temperature is not too high as the months of May and June are to be specially avoided due to the heat of Rajasthan which can make you very uncomfortable and you may get sick. Also one can visit during the month of April and September as the Navratri festival is celebrated.  where the Langar is served by BSF. Temple is beautifully decorated with flowers which looks glorious as during the time the temple is flooded by the devotees from the various parts of the country.

Places to visit near the temple

Thar Desert:  The beautiful desert does not need any introduction as if one is visiting the temple should not forget to camp under the stars camel safar.It is quite famous for its camel safari,Jeep Safari,night camps,Rajasthani folk dance. The Heritage museum this Museum is located in the main market which is popular for its history, culture and architecture one visiting there should never miss the vibrant puppet show which takes place near .It  is located at a distance of 120 km from the temple.

Timings : tourists can visit the temple from 5 a.m. to 8:00 p.m. from Monday to Sunday. Aarti of the tanot Mata temple is scheduled between 6 p.m. and 7 p.m. in the evening.

Entry fee : there is no entry fee to visit the glorious Temple.