A land of royalty, grandeur, the architecture makes Jaipur a Pink City that just takes a walk along the streets of the walled city. The best tips and places to travel to the incredible heritage and pink city Jaipur we will share with you.

The rose gold facades of the towering monuments to the blush tones of sunsets, it’s like a pink paradise seemingly everywhere you look at it. I have visited Jaipur 2 times till now, each time I was mesmerized by a new shade of this Pink City of colors chronicling as a captive narrative of the Jaipur heritage as it is India’s first planned city built by the Rajput King, Sawai Jai Singh II. The lasting legacy of the royal family and their fabled forts, palaces and landmarks hold as much as the more contemporary culture scape which has flourished in recent years.

If you are visiting for the first time here, a list of the places to visit and things to do in this most radiant pocket city Jaipur of the Rajasthan.

It is situated about 11km away from the city Centre, there is something about the enduring grandeur of this mountainside fort which makes you want to whisper as it is truly a different place in this another world. It was built in the 16th century by Maan Singh who is a trusted general of the Mughal emperor Akbar – the awe-inspiring architecture combines the traditional Rajput and Hindu styles with the gracefully ornate touches characteristic of the Mughal era.

The sandstone complex houses several different courtyards and buildings such as Diwan-i-Am and Sukh Niwas. The most striking is undoubtedly Sheesh Mahal. It is designed as part of the queen’s private apartments, the walls and ceilings of this “Mirror Palace” are sheathed by the intricate carvings and paintings made of glass.

It is set in the heart of the Old City the walled complex of City Palace is a treasure trove of wonders, spanning gardens, courtyards and buildings from 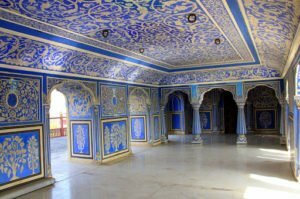 different eras. The four gates of the inner courtyard are particularly impressive, each representing one of the four seasons and dedicated to a God. There is the Peacock Gate, the Lotus Gate, the Green Gate and the Rose Gate. From antiques and artefacts to an unparalleled collection of miniatures, the lavishly-appointed City Palace Museum is a destination in its own right, while a private tour of the royal residence Chandra Mahal is the riveting education in the storied history of Jaipur. It is here we learn that the city was imbued with a yellow-hue before being painted pink as a way of welcoming the Prince of Wales to Jaipur in the year 1853. Our wanders take us from the Shobha Niwas to the airily-bright quarters of Sukh Niwas, fashioned with the limestone and mood-lifting shades of indigo to have an innately cooling effect!!!

It is built in the shape of a crown, the five-storied Hawa Mahal was built in the year 1799 to provide women of the royal household a discreet viewpoint for looking out onto city life.

Now symbolic of the Pink City, the iconic structure is not unlike a scene straight out of the Wes Anderson film. Don’t miss the colorful glass windows, which filter in the sun’s rays to the project patterns on the floor!

The recent revival of the capacious JKK Museum as a Jaipur’s cultural hub owes much to the new-age visions steered by the Pooja Sood. Kendra is curated as a platform dedicated to cross-cutting fields of the arts and culture, running the gamut from new media and popular culture through to architecture and design, painting and photography.

Jaipur’s Jewellery houses remain an integral embodiment of the city’s rich cultural fabric. It was established in the year 1852, Gem Palace is one of the country’s oldest jewellery stores housed in a haveli embellished by the Mughal-style minarets. It is one of the instantly dazzled by the endless rows of gemstone jewellery glittering radiantly behind glass cabinets.

These are the best places to visit in the heritage city Jaipur during your visit so visit these places and other things to enjoy the view of Jaipur.