Pushkar is one of the oldest towns situated in Rajasthan. The city is unique in its own terms as it attracts many tourists from all over the world. As a favorite destination activity as there are a large number of temples and 50 bathing Ghats. According to the legends, it is believed that Lord Brahma has dropped lotus in this beautiful city which later appears to be a Holy lake.

‘The Nag Pahar’ forms a border between Ajmer and Pushkar which literally means ‘Snake mountain’. Beautiful Roses of the city are exported all over the world it is also known as ‘The Rose Garden Of Rajasthan’. Apart from this also the architectural heritage makes Pushkar a fascinating city. The streets of the city are also a market area. Even though the evening puja ceremonies purify your soul completely. The famous thing about the city is Pushkar Mela or Pushkar fair which has its religious aspect. There is a very large amount of Pilgrimage gathering which takes a dip into the lake during the time of fair. It commences on the Prabodhini Ekadashi and ends on Kartik Poornima.

While the festivals in Pushkar never end they stay alive all year long but the most preferable time to visit the holy town is between November and March because the weather is pleasant. Even though the desert is quite familiar for the Safaris as the summer becomes the most typical time to visit the city. During this season the days are too hot. Although the town does not experience much rain it has a very different charm and beauty during this season. It is considered to be an offseason in the city.

Pushkar lake is situated in the town of Pushkar in the Ajmer district. The Sarovar is also known as ‘Tirth Raj’, which is the king of the pilgrimage sites. The lake is semicircular in shape and about 8-10 meters deep. The magnificent lake is surrounded by 52 bathing ghats and about 400 temples. Pushkar Sarovar is highly rich in fish and other aquatic life. 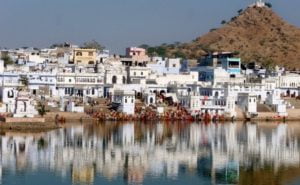 Brahma temple has a very significant place in every Indian’s heart. It is a single temple in the world that is associated with Lord Brahma and a major part of Pushkar Sightseeing. Beautifully built with white Marble and brilliantly adorn with silver coins. The Chaturmukhi idol of Lord Brahma is worship here in the Garbhagriha.

The beautiful temple is dedicated to Lord Brahma first wife that is goddess Savitri. It is situated on the hill right behind Brahma Temple by climbing the steps one can easily capture an impressive view of the city. Savitri Cursed Lord Brahma for marrying another goddess so the outcome was this is the only Brahma Temple present all over the world.

It is a very popular shrine and attraction for many tourists every year. It is dedicated to Lord Rangji, who was an incarnation of Lord Vishnu. The temple’s architecture is a mixture of South Indian style, Rajput style, and Mughal style which is very highly noticeable. The high rising Gopuram is another feature of the temple that attracts the tourist.

The shrine was constructed in the 12th century by the ruler Anaji Chauhan. The magnificent temple is dedicated to the third incarnation of Lord Vishnu. Varaha temple is one of the largest and most ancient temples of the city.

Places to visit nearby Pushkar:

Ajmer is situated in the Ajmer district of Rajasthan which is the fifth largest city of the state. It is at a distance of 135 kilometers from Jaipur. It takes 21 minutes to reach Ajmer from Pushkar and has a distance of 14.5 kilometers. The best time to visit the city is during winter that is from November to March. The mesmerizing city is also termed as the gem in the lap of Aravalli. The city is well connected by air, rail and by road. There are many places to visit like the famous Dargah of Ajmer that is Dargah Sharif, Rani Mahal, Nasiyan temple, Sola Chamba, Daulat khana, and many more.

Kishangarh is a marble city which is located at a distance of 43 kilometers from Pushkar which takes about 50 minutes to reach. The best suitable time to visit the city is from October to March. Kishangarh is a well-developed city and as well as well connected by air, rail and by road. The city serves a wholesale market of Red chilies, beautiful Marbles, and is also famous for Granite. Major attractions of the city are Phool Mahal Palace, Roopangarh Fort, and Kishangarh Fort.