A place with lots of comfort joy and tranquillity, Mount Abu is the state’s only hill station which is 1722 meters above sea level and has verdant greenery. All over the Aravali Range railway station has Royal holiday Lodges Bungalows all-inclusive of British style. Mount Abu hill station is the best preferable comfort destination for many tourists as the greenery of the place attracts many tourists every year from every part of the world. Not only the scenic beauty attracts the visitors there but also the religious importance for Jains draws tourism here.

The history of Mount Abu straight comes from the Puranas known as Arbudaranya or’ The forest of Arbuda’ there are a lot of leaves regarding the hill station one of the leaders and suggest that Seth Vashishth performed at the peak. Arbuda mountains or the hill station Mount Abu is a home for many Gurjaras as many of the inscriptions were found like Dhanpala’s “Tilak Manjari”.

The hill station always enjoys a very pleasant and soothing climate throughout the year. The summers in Mount Abu are not very hot as the temperature varies between 23 degrees Celsius to 33 degrees Celsius. The monsoon there brings pleasure with it which completely enhances the beauty and the greenery of the forest. The winters here are quite cold even though there are some chances of rain. Nights become cold and the mountain gets colder during the winter season. One can visit the hill station throughout the year and enjoy the soothing climate. The period between November to March is considered to be the best season for Mount Abu Sightseeing Tour.

Nakki Lake is the first-ever man-made lake in India, is also the most preferred place to see in Mount Abu. You can go for a boat ride at the lake and can also enjoy horse riding around the lake. Also, you can capture the panoramic view of sunset which becomes so adorable. The lake is about half mine in length and 20 to 30 ft deep. There is a Toad Rock on the hill which is near to the lake. It is also known as a holy lake as Mahatma Gandhi’s ashes immerse in Nakki lake on 12th February 1948. 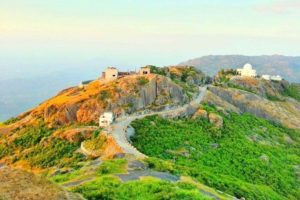 The highest point on the mountain range is the best place for sightseeing in the beautiful hill station. It takes about 300 steps to reach Guru Shikhar. There is a temple named Guru Dattatreya who was the incarnation of the divine Trinity (Brahma Vishnu and Shiva) people there enjoy the place for its religious significance and for its natural beauty.

Trevor’s tank is a Crocodile Park which is a man-made crocodile spot, at a distance of about 5 kilometers from Mount Abu. This beautiful spot gives amazing scenic beauty and is also a great spot for crocodiles birds and sightings. The beauty by which the lake is surrounded makes it a very popular spot and attracts a number of visitors towards itself.

Jain Temples are very famous temples built between the 11th and 13th centuries. Dilwara Jain temple is one of the best specimens of architectural brilliance in the country, it is a complex of five structures. The temples are located at a distance of 2.5 km from the magnificent hill station. The white marbles have carvings and the interior of the temples is comprising of intricate designs.

Lal Mandir is on Dilwara road just near the Dilwara Jain temple. The small temple is dedicated to Lord Shiva. It is a temple that offers a very peaceful ambiance and is also one of the most ancient holy places in Mount Abu. Lal mandir gets its name because of the red walls in the entire temple.

The Fort is the most beautiful place in Mount Abu which attracts a very high number of tourists towards its side. It resides around 26 km from Mount Abu and was originally built by the Paramara dynasty.  Later on, the fort was known as Achalgarh.

It is an important shrine dedicated to Goddess Durga. After climbing 365 giant stairs you reach the temple. The temple is the best example of peace and tranquillity the views from the top are highly adorable. The panoramic views change the entire environment as it is a very beautiful adventure.

How to reach the mesmerizing hill station:

Places to visit nearby

It is a place that resides at a very short distance from Mount Abu. Sirohi is a minor hill station but a very excellent place to see. It is home to many beautiful temples and has natural attractions. The most popular place to visit in this beautiful city is Temple Street which has 18 temples. Another major attraction of the city is the Savdhaan temple and the Sun temple of Vaman. The best time to visit is during winter as the heat of the mountains would not trouble you and the exact distance from Mount Abu is 83 kilometers.

As we all know it is one of the biggest tourist places near Mount Abu which is well. The best thing to do in Udaipur is shopping. The one who is Shopaholic can buy the best souvenirs, paintings, and many more traditional wears at the famous Hathi Pol bazaar. The best preferable time to visit the city is between October to February. Also, the distance between Udaipur and Mount Abu is about 163 kilometers.