Jain Temples are very famous temples built between the 11th and the 13th centuries. Dilwara Jain temple is one of the best specimens of architectural brilliance in the country, it is a complex of five structures. The temples are located at a distance of 2.5 km from the magnificent hill station. They are carved from white marbles and the interior of the temples are constructed through intricate designs.

It is the most beautiful site for Jains which is designed by Vastu Pal Tejpal and was built by Vimal Shah. The temple has stunning designs and patterns with carved on the walls of the roof and on the pillars as well as. Dilwara Temple includes 5 temples namely Vimal vasahi, Luna Vasahi, Pital Har, Parshwanath and Mahavir Swami temple which is dedicated to Lord Adinath, lord Rishabhdeo, Lord NemiNath,  Lord Mahavir Swami and Lord Parshwanath. All these shrines have Rang mandap, a central hall, Garbhagriha and Navchowki which is a group of nine heavily decorated ceilings. Dilwara temple clearly shows the Jain values and principles. The architecture of the pilgrimage is truly inspired by the Nagara style and is also a collection of manuscripts. There are a total of 48 pillars in all the temples which comprises the beautiful figures of females in the different dancing postures.

This temple is dedicated to Lord Adinath who was the first Tirthankara. It is the most famous and oldest temple and was built by the Vimal shah Solanki Maharaja of Gujarat in 1021. The temple has highly rich carvings on the roofs, doors, pillars. The intricate patterns of petals, flowers, lotuses and scenes from mythology attract the mind of tourists towards itself. 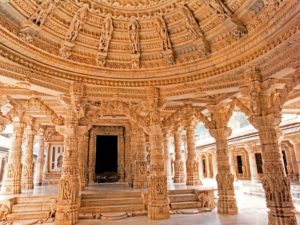 It was built in the year 1230 The temple is dedicated to Lord Neminath the 22nd Jain Tirthankara. The Luna Vasahi temple was built by two brothers namely Vastupal and Tejpal. The central hall Rang mandap has 72 figures of Tirthankaras and 360 figures of tha Jain Monks.

It was a third temple which was built by Bhima Seth and is also dedicated to Lord Rishabdeo who was the first Jain Tirthankara lord. Statue of Lord Adinath which is made of five metals and brass is beautifully installed in the temple.

It is a three-storeyed building and is also the tallest among all the temples and was built by Mandik as a dedication to the Lord Parshavnath who was the 23rd Jain Tirthankara lord.

The last but not the least the fifth temple was dedicated to Lord Mahavir, the 24th Jain Tirthankara the temple is smaller but it attracts you equally. The temple was built in 1582.

How to reach the Dilwara Temple-:

The distance between the beautiful hill station and the Dilwara temple is just 2.5km either if you have your vehicle you can easily reach to the mesmerizing place or you can hire a cab, taxi from Mount Abu which can conveniently drop you to the temples.

Places to visit near temples-:

It is an important shrine dedicated to Goddess Durga. After climbing 365 giant stairs you reach the temple. The temple is the best example of peace and tranquillity the views from the top are highly adorable. The panoramic views change the entire environment as it is a very beautiful adventure.