Bada Bagh is one of the best remnants of Rajasthan’s illustrious past Bada Bagh is a series of cenotaphs, The Glorious cenotaph glimmer in the desert of the Jaisalmer and is located 6 kms towards the north of the golden city Jaisalmer  which is on the way to Ramgarh. It is located at the equal distance boht from the Lodhruva and Jaisalmer.Bada bagh is a very popular site as it has many cenotaphs of the Maharajas and the members of the prestigious families of the 6th century.

According to the Hindu literature Bada bagh is translated as ‘Big Garden’.when the beautiful structure was first constructed, it had a majestically beautiful garden around it. Perhaps today there is no presence of the garden but till the date the cenotaph is quite peaceful. These are the tomb-like structures which are also called as ‘chattris’.The first cenotaph was made in the honor of Maharaj Jai singh II. After this various cenotaphs were constructed of different sizes. Also there’s a small stone inscription there with name and date inscribed on them, but only few of them have a brief description.

History of the ‘Big garden’

Maharaja Meharwal Jai singh took the initiative for the construction of Bada Bagh. He also constructed a dam in the desert park due to the dam help the booming of flora and fauna when marble dressing passed away on September 24 1743 his son Luna Karan constructed Achcha tree in the memory office father as it bought a new culture to the Bhatti dynasty. In the year 1947 the tradition of the construction of ‘chhatris’ discontinued when the princess died due to the mysterious disease.

The beautiful chhatris at Bada Bagh:

Tradition of constructing Chhatri started around the 17th century which only lasted till the 20th century and started with the construction of the chhatri of Maharwal Jaisingh . Jai Singh II did many of the contributions among them one was the construction of a Water tank which was made to flourish the flora and fauna. As with construction of the cenotaph of Jai Singh II a new tradition was started in the Bhatti Dynasty and later on it was decided to construct the chhatris in the honor of every royal king and queen. However the tradition discontinued with the mysterious death of Maharaja Jawahar Singh. It is  said that the more powerful the queen or king was the taller the chhatri stands each of the Chhatri small inscriptions written on the stone even on some of the chhatris you can witness brief descriptions. 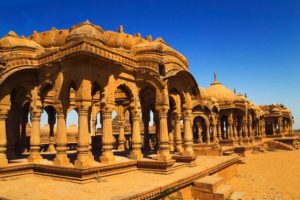 How to reach the Bada Bagh:

The best time to visit the beautiful Bada Bagh is the period between October to March .Evenings are the most advisable time duration to visit the Bagh so you can plan your visit in the winters as the weather during this time is very comfortable because the summers may be very hot which would exhaust you.

Places to visit near the Bada Bagh

It is a wildlife enthusiast which attracts many of the tourists towards itself one would genuinely fall in love with the place. As the place is spread over 3000 square feet it shelters a wide species of exotic animals and beautiful birds.

These are situated on the outskirts of the Golden city of Jaisalmer. Sand dunes help you to explore the culture and tradition of Rajasthan. You can find a camel and enjoy the Safari in the dunes . Apart from all these there is also a small bazaar which is the best place for the Shopaholics.

The Lodhruva Jain temple at the golden city has been constructed in the chinese style architecture. The temple has eight corners. The slanting walls reflect the Pagoda in its architecture.

Jaisalmer Fort is the best example of the architecture for the one who is fond of exploring architecture and its  history. The height of the majestic Fort is approximately 200 foot tall and also it is all covered with the huge walls which have approximately a height of 30 feet. It is also believed one of the very ‘Living Forts’. The beautiful Fort was constructed by Rawal Jaisal in 1155 A.D. Apart from this the Fort also accommodates the most of the population of Jaisalmer there also 99 bastions resided in the Fort .

Timings : one can explore the Bada Bagh anytime starting from 9:00am in the morning to 6:00pm in the evening. As it only takes 1 to 2 hours for anyone to explore the site and it would take more time for a very observer or the one who is doing a research work .

Entry fee : The entry prices are as follows: