Bagore ki Haveli situated near Ambrai Ghat is another attraction of Udaipur that pull trippers towards the city of lakes. Bagore ki Haveli, standing in front of the waterfront of the Lake Pichola, was built by Shri Amarchand Badwa as Haveli better known as traditional Indian house. Then after a period of time, it was converted into a museum.

Prime minister of Mewar kingdom Shri Amarchand Badwa constructed Bagore ki Haveli in 1751. After his death, the haveli fell in his relative Nath Singh’s lap. He took over the place and ruled over it until his death. Then in 1878, Maharaj Shakti Singh extended the haveli further by shaping triple-arched gateway. Since that day, this particular haveli is referred as Bagore ki Haveli. Later after independence, the government gave it to Zone Cultural Centre for restoration work. They converted it into a museum without damaging its ancient architecture.

If you are an art lover then you would love exploring this particular time-honoured masterpiece. Bagore ki Haveli represents Mewar’s aristocratic, royal and traditional culture as it is designed and decorated with huge courtyards, balconies, jharokhas, decorative archways, cupolas, exceptional mirror work, glasswork and mural paintings. There is a fountain standing in the middle of the Haveli. This two-storied Lotus Fountain comes into the vision when visitors enter inside the Haveli. 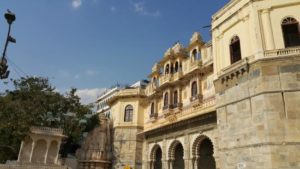 Bagore ki Haveli has 138 rooms and all of them decorated with mirror works, art and stone designs. Among these rooms, the Chambers of the Royal Ladies is worth visiting. It is the main attraction of the Haveli as this chamber contains colourful windows and two peacocks made with coloured glass mosaic. Along with this, Bagore ki Haveli has three chowks- Kuan Chowk, Neem Chowk and Tulsi Chowk and chambers like The Kanch Mahal, Shringar Kaksh, Sangeet Kaksh, Diwan-e-khas, Manoranjan Kaksh etc. All these chambers depict royal cultures and traditions. They consist a huge collection of ancient costumes, weapons, accessories, playing board games, musical instruments etc.

Things to do at Bagore ki Haveli

Visiting Bagore ki Haveli itself an adventure as it is no less than a palace.  But this particular monument offers more, there is a lot you can explore in this Haveli. Such as-

Bagore ki Haveli Museum is mostly separated into five main parts. The Puppet Museum, the main haveli, the Turban Museum, the Weapon Museum, and the Wedding Depiction Section. The most important quality of these museums is that they all display different types of collections. Puppet Museum has a display of a number of puppets. And there is a section of king’s courtroom set up in the form of a puppet.

On the other hand, Haveli Museum contains personal rooms of the royal ladies, their bedrooms, dressing rooms, living rooms, worship rooms, bathrooms, and recreation rooms.  These rooms are purposely arranged in the same traditional style to showcase the living standard of the royal family. Where else, Turban Museum’s collection is completely different from these two museums. This museum displays a collection of turbans that belong to Punjab, Haryana, Rajasthan and Gujarat. It portrays their costumes and a little part of their culture. Weapon section represents various weapons used by the kings and their armies during the battle. And the wedding section tells the story of an Indian wedding through puppets or dolls.

Winters are considered the best time to visit Bagore ki Haveli. People ignore exploring it in summer due to the scorching heat.