The Haveli is almost about 300 years old which advance a beautiful architecture and arc the roof which is in the shape of a peacock contains 38 beautiful carved balconies which are surmounted with pale- cupolas and all have various distinct designs. The entrance Gateway is also marvelously carved by two stone elephants which is considered as the symbol of high rank in Rajasthan also with interior walls covered with magnificient paintings. The Haveli contains a number of rooms frescoeas, pillars and courtyards. In addition to all these the Haveli is also having a Windows screen which is beautifully elaborated with carving. There are a lot of charming paintings adorning the panels also the shared walls are not just unique in nature but they are the best example of ones craftsmanship of that time as the structure shows the royalty the magnificent monument still has 5 floor and is also considered as one of the architectural wonders of Jaisalmer.

How to reach the magnificent Haveli

Reaching the marvelous architecture is not so difficult if you want to visit the Haveli then you would need to reach Jaisalmer first of all. As there is no airport in Jaisalmer so you need to fly to the nearest airport which is Jodhpur and is also 275 kilometres away. Once you reach Jaisalmer one can easily take a cab driver to the Haveli without facing any inconvenience also find the local buses plying there as well as auto rickshaw which can make you reach to the Haveli very easily. 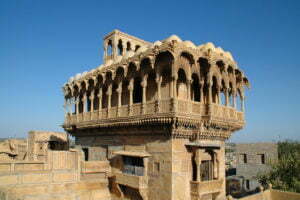 Best time to visit the Haveli

The best time to explore the Haveli of the golden city is one should better come in between the month of October to March because these are the months one can easily enjoy the weather of Rajasthan which is very pleasant and is also considered to be the best period of sight seeing and doing various activities in Rajasthan.

Things to be not made at the Haveli

One should enjoy within the structure of the peacocks who are dancing from all the sides and  also check the blue to cupola roof that is certainly one of the most important Landmark of the palace, also experience the detailed architecture. The tour guide also helps you to explore some of the secrets of Salim Singh ki haveli. Also have a look to the glass window which is ornamented by the many precious stones and minute architecture.

Best places to visit near the Salim Singh ki Haveli:

The Fort is one of the major tourist attraction which is best known for its construction architectural brilliance, craftsmanship. The Fort is situated in the middle of the Thar Desert and is considered to be one of the largest Fort ever built.

The lake is one of the most important Landmark of the golden city. Gadisar lake is known for its amazing history the boat rides and soothing atmosphere. One can easily fall in love with environment of the lake which was built by the Raja Rawal Jaisal. The lake is also considered to be one of the water conservation reservoirs.

Interesting facts about the Havelli –

The Haveli is designed and similar to the poster of a dancing parrot. Initially has 7 floors but later upper 2 floors were demolished after the orders from the rulers. The Haveli also has a number of exit points which are to be used in the course of any danger. It also attracts a number of tourist coming to Rajasthan all over the year as it is also filled with various stone carvings and wonderful architectural crafts.

Entry fee: INR- 10 for the Indian Citizens and INR-15 for foreign individuals, you may have to also pay INR 50 to INR 100 if you are carrying a camera into the Haveli.