Udaipur is a popular tourist destination of Rajasthan. It is famous for its historical scenic locations, old and beautiful Rajasthani architecture, ancient forts, stunning lakes, royal palaces and romantic spots. The best part of this city is that it is surrounded by the Aravalli mountains. These mountains give a gorgeous background to the city. Bada Mahal is one of the most significant historical places of Udaipur. This marvellous structure is also a part of the great grand City Palace. It retains previous royal Rajput and Mughal architecture. The highest point of this palace is its unique stature and significance.

Bada Mahal is an 89 feet tall rock structure. Built-in the 17th century, Bada Mahal was used as the men’s section of City Palace. Males of the royal family used to come here to spend their time with each other. Women were not allowed to enter in this section of the Palace. It was exclusively built for royal virility. The palace has a swimming pool that was used during the Holi festival by royal males.

Locations and Surroundings of Bada Mahal – Based in City Palace, Bada Mahal is also known as Garden Palace as it consists elevated garden, terraces and beautiful fountains. Here you can see several other beautifully carved edifices, painted mirrors, strong pillars, extensive courtyards, dazzling balconies, intricate cravings. The length of the ground floor of the palace is exceptionally large. According to the current architectural pattern it is complicated. For example, even if you are standing on the fourth floor still it will appear like ground floor. This different and setup pattern often attract tourist towards this palace.

Things to do at Bada Mahal

You can do photography in Bada Mahal as its walls and rooms are intricately adorned with mirrors and art pieces. Its stunning glass window sight is worth capturing. 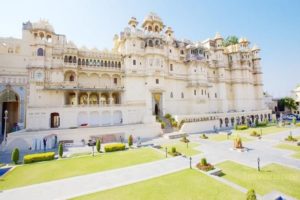 Places to visit near Bada Mahal

Bada Mahal is just a part of the massive City Palace. It would take a lot to explore nearby places. Though, these are some places you should definitely visit.

Lake palace also famous as Jag Niwas is one of the most popular attractions of Lake Pichola. The most beautiful thing about this palace is that it was constructed in the middle of blue shining water. The main beauty of this palace is its attractive fountains and parks and the royal architectural work.

Fateh Prakash Palace was a Shiv Niwas that was later converted into heritage hotels, it retains previous  royal architecture. And the peak attraction of this City Palace is the Amar Vilas as it includes of the lush green gardens, terraces and beautiful fountains. Here is one more thing: the art gallery is known as the Chinese and dutch tiles and arts.

The chamber of mirrors and glasses is another marvellous composition. In 1716,  this palace was specially designed by Maharana Pratap for his beloved queen Maharani Ajabde.

Bhim Vilas is a part of City Palace and should be a part of your trip too as this palace displays a gallery of miniature paintings of Lord Krishna and Radha. All the pictures depict their real-life and tell a different tale about them. Along with these places, you can explore more spots like Tripolia Gate, Suraj Gokhda, Dilkhush Mahal, Krishna Vilas, Mor-chowk, Surya Chopar, Shambu Niwas, Moti Mahal

Bada Mahal is a part of City Palace that’s why it same morning or evening hours are the perfect hours this place. October to March, the winter season is considered as the best time to visit Bada Mahal. Ignore stepping inside in summer to avoid the scorching heat of the sun.

For visiting Bada Mahal you would have to give additional charges. That is-