Situated near the town of golden city Jaisalmer, the desert National Park is one of the largest parks in the country which covers the area of 3162 square kilometres. The desert National Park also covers a wide area extending from Jaisalmer to the way to the India- Pakistan border. Desert Park is located close to the beautiful Thar Desert and at a distance of 40 km from Jaisalmer which has a number of existence of flora and fauna inside it, Apart from all this the desert contains various types of rocks, intermediate areas, compact salt lake bottoms and also the fixed dunes, the dunes also make up to almost 20% of the area. One can witness various types of desert plants, cacti thorny bushes.

A Safari filled with adventure is the best way to explore the desert’s ecosystem. Also one can indulge in camping and bonfire-like activities there . The ecosystem of the desert  is very harsh and fragile but one can find various numbers of flora and fauna. It is also a house for a variety of migratory desert Birds. Even though The Great Indian Bustard is also found here. Apart from that various types of species are found here just like Eagles, Harriers, Falcons, Buzzards, Vultures, Tawny Eagles, Spotted Eagles, The desert Park also has a collection of fossils of various animals and birds some of them are also considered to be 180 million years old and some 6 million years old fossils of dinosaurs are also found here. Even though the landscape changes from morning to evening, also a photographer there has a lot of work to do.

Flora and Fauna in the park – If You are very keen to know about the Desert National Park come let’s explore the flora and fauna of the National Park.

If you are on time at the park one can easily spot Desert and Bengal foxes. Apart from these the desert National Park also Shelters spiny tail lizard, desert monitors, sandfish re the important members of the park. The park also Shelters Blackbuck, Antelope, Cervicapra Rajputana chinkara Indian Fox, Vulpes and Desert cat at this place are easily found.

Desert National Park is considered to be heaven for Bird watchers. The birds and the park are truly beautiful and the star of the desert National Park which houses over 120 species of domestic  and migratory birds. Also the park has various common species just like – Demoiselle ,Eagles, Falcons, Partridges, Bee-eaters, Larks, Shrikes when you explore the next section of the park you will come across some ponds there in the park.

The park also has several members of this category just like Monitor- lizard, Spiny-tailed lizard. Russell’s viper has been also spotted in the park, Saw-scaled viper and common Krait.

Although the park has a sparse one but still one can find a variety of vegetative species there in the park. The important species are aak shrub,sewan grass and cacti.

How to reach the desert National Park

By air : Jaisalmer has no airport facility so the nearest airport is  Jodhpur airport which is situated at a distance of 300 km so once you get down by the flight you can easily take a train to Jaisalmer or get a direct cab ride which would take something around 4 hours and 46 minutes to go by road.

By train : Jaisalmer railway station is the nearest point to reach the Majestic Desert national park. One can also enjoy a ride on ‘Palace on Wheels’ to explore the exotic park. The station is situated at 13 kms of distance from the park. It takes 20 minutes to travel between the two spots.

By road : As Jaisalmer has a very strong connectivity of roads with the other states. You can  also have both the options of deluxe and ordinary buses. Apart from this you can also hire rental cabs or can travel with your own vehicles from Jodhpur, Bikaner, Jalore, Jaipur, Barmer and Ahmedabad and many more parts of the country.

One Can have a visit to the park anytime but the months from October to March are the best suitable time to visit the  desert National Park.

Visit to the Desert National Park during summers:

The Jaisalmer witnesses very hot climate during the summers so it is not advisable to plan a visit in the summers because you may find the temperature rising Hai just like 40 Degrees although the nights are a bit cooler but the days in the summers are very hot and would make you feel ill.

Visit to the desert National Park during monsoons:

As the rainfall in this area is equivalent to negligible because the place is located in the centre of the Thar Desert so the part witnesses heavy Dryness during the time. 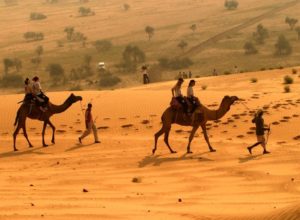 Visit to the desert National Park in winters:

As  the winters  are the best time to explore the Exotic national park because of the very pleasant and soothing nature.Although  the daytime temperature of  the city revolves around 22 to 24° temperature.The winter Nights in Jaisalmer tend to be very cold as the temperature level drops from 7 to 8 degrees the fluctuations in tjr temperature during winter season are easier one.

The places  not to miss near the desert National Park:

Khaba Fort: It is a spot which is the best  architectural example and the small museum there  is overloaded with the antique artefacts and various crafty things which take you back to the era of 1880.

Bada Bagh : Bada bagh is also initially known as ‘Big Garden’ according to the hindu literature.The chhatris are the major attractions to the tourists.

Activities to be done in the desert National Park:

Sightseeing at the desert National Park is one of the most important and lovable activity which is done by every tourist , You can explore the beautiful dunes and the lake and  can also easily simply rejuvenate at the gadisar lake and enjoy the soothing climate by watching the villagers singing and dancing. Apart from this the path of the lake is guided by a beautiful gateway namely Tilon-ki-Pol.

Jeep safari is the best adventurous activity which one should try at the national park.

Timings: You can witness the species of the Desert national park all the seven days between 7:00 am in the morning to 5:00 pm in the evening.